With warm-hued mahogany, stylish design touches, a cutaway and onboard electronics, this guitar makes a strong pitch for the contents of your wallet.

Kudos must be given to Lâg because few people are turning out nicer-looking guitars at this kind of price. The finish is excellent, the binding work can’t be faulted and there’s an overall crispness and precision to the design and build that wouldn’t be out of place on instruments costing twice as much.

Having said that, the materials used in the construction are fairly humble. The mahogany certainly looks superb, but this guitar has a laminated top as well as laminated back and sides. The grain of the front and back looks similar, but while the back appears bookmatched, it’s hard to see whether there’s a centre join in the top. The mahogany sides have closer grain and display some subtle figuring, but the factor that really lifts this guitar is the ‘French Satin’ finish. As well as enhancing the natural beauty of the wood, the soft sheen feels gorgeous and there’s no grain sinkage whatsoever. It’s a classy finish that requires no excuses and neatly avoids the ‘dipped in plastic’ look that many guitars in this price range tend to display.

The same black plastic binding is used front and back, with thin layers of off-white pinstriping adding definition to the body outline. The factory has also rolled over all the edges, which greatly adds to the comfort factor. This work has been done with precision and we particularly like the way the roll-over graduates back to a square edge a centimetre or so before reaching the neck joint. It’s very classy. 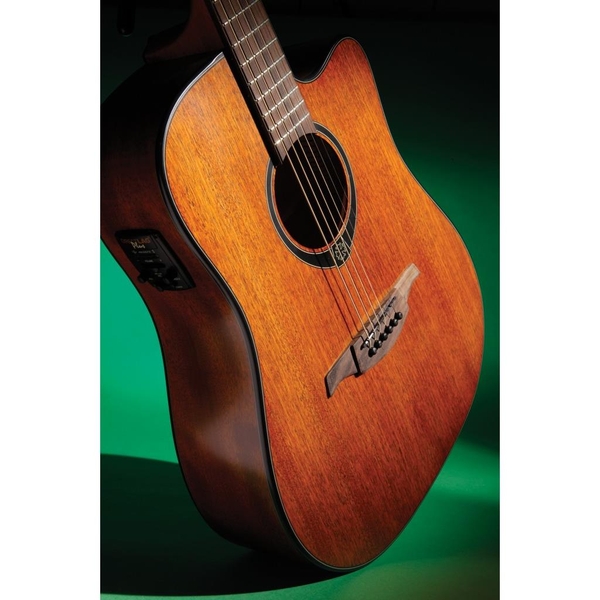 The Occitan Cross is the emblem of the Languedoc region where Lâg guitars originated; the company has developed a modern rosette design that incorporates this ancient symbol and it gives their acoustic guitars a very distinctive look. The one on this guitar is black with off-white pinstriping to match the binding, although the pictures of this model that we found online show a mahogany cross, and we think the contrast looks even better. 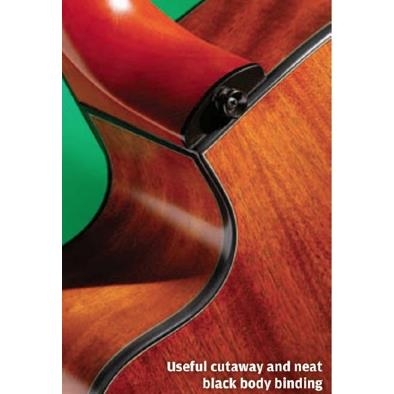 Lâg uses a stacked heel with a single join that’s hard to spot and a squared-off heel shape that falls somewhere in between a vintage Gretsch and a Froggy Bottom.

It’s a mahogany neck with a relatively slim, modern and comfortable profile. The headstock is scarf-jointed with a mahogany overlay that’s about 5mm thick all along the central section. The edges of the peghead are routed to reduce the depth for the tuners.

Rosewood is used for the bridge and the fingerboard. There are no markings or inlays on the front of the fingerboard, but there are small white dots on the side.

The fretwork is adequate rather than impressive; a decision has been made to leave some of the higher frets only partially crowned and the bass side fret edges along the fingerboard tongue are not quite as rounded off as they could be.

The Occitan Cross reappears on the rear of the unbranded diecast tuners. They’re satin black chrome, which ties in visually very nicely with the logo, the binding and the black graphite nut and compensated saddle.

The onboard pickup system pairs a NanoFlex undersaddle piezo pickup with a Direct Lâg Plus preamp and control panel. The system is made for Lâg by Shadow and the equalisation controls include Bass, Mid and Treble. Push-button switches are provided for phase reverse and the integrated tuner, along with a Volume slider and a low battery indication LED. The system runs on two disc-shaped mini batteries that are stacked in a tray that slides out of the control panel.

Despite its laminated construction the T77DCE still manages to sound like an all-mahogany dreadnought. The high frequencies have a sweetened quality that remains clear and uncluttered by harmonic overtones. Rather than the big bass and trebles with scooped mids that characterises so many dreadnoughts, the T77DCE really focuses on the midrange. It’s upfront, punchy and solid, with a pleasing degree of woodiness. For a guitar with a laminated top, the dynamic response really impresses. The T77DCE isn’t a loud dreadnought by any means, but it’s certainly loud enough and it really responds to playing touch. 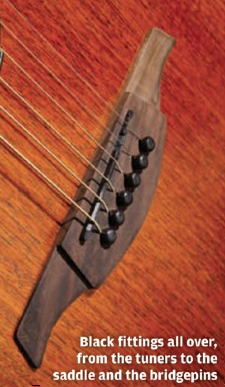 If you’re a slide player looking to set up a high action then the T77DCE sounds very smooth and downhome. In fact it’s suprisingly good, given that a high action should be at odds with the fast neck and cutaway body.

As an undersaddle piezo, the sound of the pickup system is fairly typical of its type. It’s not a hi-tech onboard microphone or a specially-voiced magnetic pickup sort of tone; instead it’s bright and clear, with plenty of handling noise transmitting through the body and a dynamic response that isn’t quite on the money. Even so, we were able to get palatable tones from the T77DCE by rolling back the treble and bass. The midrange control was powerful enough to draw out a wide variety of tones without creating a ‘processed’ effect, and the phase button helped to control feedback. The onboard tuner also works reasonably well, but the labelling and display lights are so tiny that those without good eyesight will need to wear their spectacles on stage.

As with plenty of sub-£500 instruments, making sure you get this Lâg set-up as well as possible will benefit your experience no end – and we think the T77DCE certainly justifies any extra bit of effort or expense. If you are primarily interested in amplifying your acoustic, then the laminated top shouldn’t be a deal-breaker; however, solid mahogany-topped dreadnoughts with equivalent specs are available around this price or even slightly below, so if unplugged tone is priority number one, you may decide to investigate some other options. Overall, however, Lâg has served up a stylish, well-made and fine-sounding acoustic guitar at an affordable price. 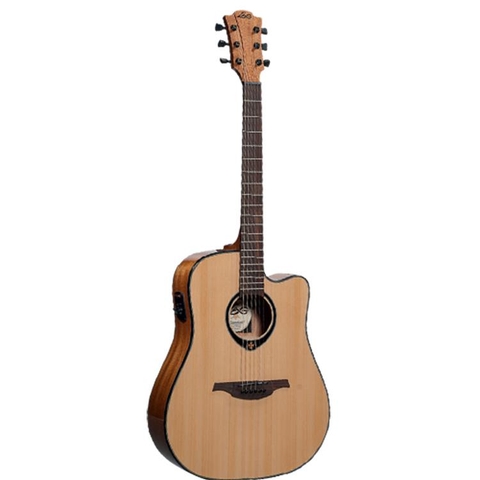 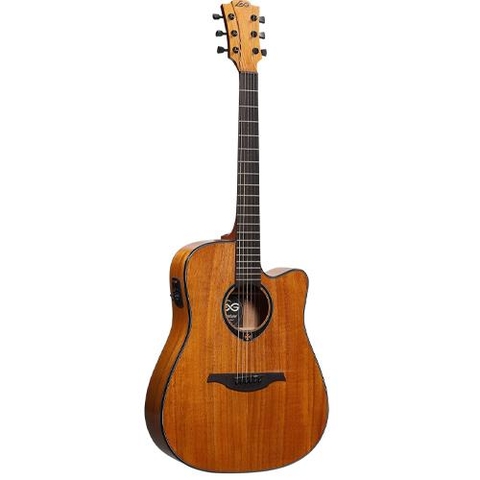